Alphadello: B is for Budgie 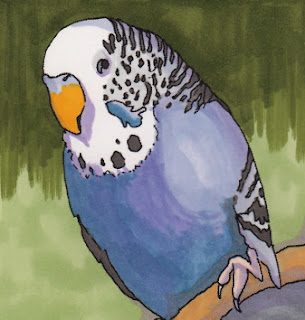 The Budgerigar is a lively little bird, and his action when courting is very comical; for he stands facing his hen, singing his chuckling little song and bobbing his head up and down with a circular motion, as if trying to indicate a halo around her face.

Foreign Birds for Cage and Aviary, by Arthur G. Butler (1910). Click here to read the book online, or download it free, from the Internet Archive.

Posted by Joanne Stanbridge at 4:18 PM 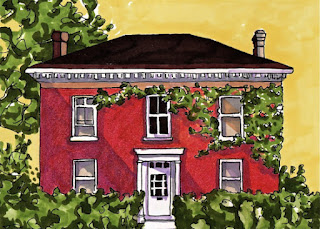 That was too many people for the little house on William Street, so in 1891 the family moved to a larger one. It was beautifully located between the university and the lakeshore on a curving road (Alice Street) that would later be called Queen's Crescent.

Posted by Joanne Stanbridge at 7:17 PM Archie never stopped learning. While serving as the headmaster of the Collegiate Institute, he published a high school chemistry textbook, and started taking medical courses at Queen's. He smoothed the way for the first women students to attend the medical college at Queen's, and stood up for them when they were harrassed by male students and professors.

In 1883 he led a meeting at Kingston City Hall, arguing eloquently that Canadian women should not be obliged to go to Britain or the United States to get their medical degrees. He proposed that a Women's Medical College be set up in Kingston. This was a daring idea in those days, but it was unanimously accepted, and Archie agreed to serve as registrar of the new college.

In the Spring of 1884 the first four women graduated. It was the first class of Canadian-born-and-educated women to graduate from a Canadian university. They were "capped and hooded 'midst much applause." Archie played down his role in their success, but the women would always remember him for his support and his "chivalrous and kindly respect for women."

Posted by Joanne Stanbridge at 9:35 PM 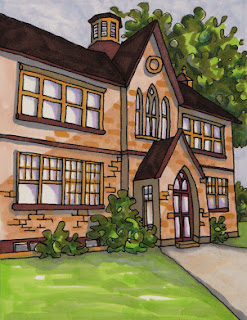 Just when it seemed Archie Knight couldn't get any busier, he was hired as the headmaster of Kingston Collegiate Institute.

The timing wasn't great. The young couple had just gotten settled in Hawkesbury, and Cordelia was pregnant with their first child. The prospect of moving 150 miles to Kingston must have been daunting.

But that wasn't all. Soon after Archie accepted the position, the Kingston school caught fire and nearly burned to the ground. He hurried there alone to find and furnish a house, to oversee renovations to the school, and to run classes for his new students from a temporary location at City Hall.

Meanwhile, Cordelia stayed in Hawkesbury with her married sister. On September 19th, she gave birth to a son, and they called him Freddie. It would be a while before they discovered that the baby had a mental disability.

Posted by Joanne Stanbridge at 5:07 PM

Alphadello: A is for Albatross 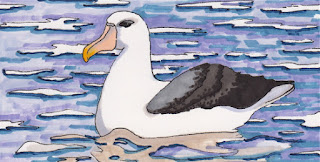 Instead of the cross, the albatross / Around my neck was hung.

The Rime of the Ancient Mariner, by Samuel Taylor Coleridge (1900). Click here to read the book online, or download it free, from the Internet Archive, as we start a new sequence on my Alphadello blog. This time, it's an ABC of Birds.

Posted by Joanne Stanbridge at 5:03 PM