Storydello: Cyril and the Silver Strike 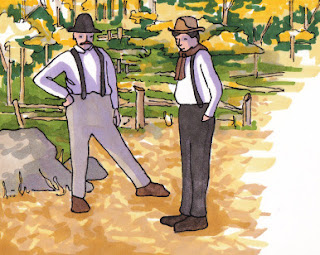 When Cyril and the others reached the site, they found silver everywhere. Plenty had been dug up along the newly-built railroad, and Professor Miller reported that "every depression in the rock on top of the hill contains much free silver."

Pieces of silver "as big as stove lids or cannonballs" were lying on the ground, but the rocks were so dirty-looking that the railroad workers had been walking past them without a second glance.

Winter soon set in, but news of the silver strike was already spreading. Everyone knew what would happen in the spring. And Cyril was going to be right in the middle of the excitement.

Posted by Joanne Stanbridge at 8:19 PM

Alphadello: O is for Oriole 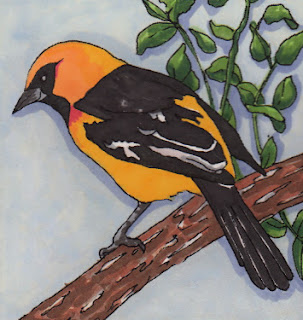 One night in Guerrero I joined a group of men and boys who, with slingshots and pine torches, were hunting songbirds on their roosts. They killed orioles, towhees, sparrows, and a few doves, all of which were later prepared for the kitchen.

The text is from Wildlife of Mexico : The Game Birds and Mammals, by A. Starker Leopold (1959). Click here to read the book online, or download it free, from the Internet Archive.

Posted by Joanne Stanbridge at 8:05 AM 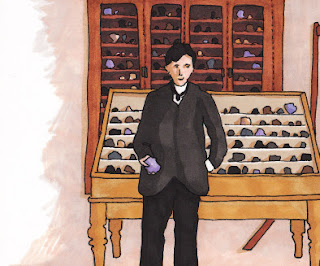 In the backwoods of Ontario, a blacksmith named Fred LaRose was working on the new railroad when his pickaxe struck a rock. It broke off "a piece as big as my hand, with little sharp points all over it." The rock had a shiny vein running through its middle. He showed it to the owner of a nearby hotel.

"Some kind of damn metal," they decided, and sent it away to be tested.

Cyril's professor, W.G. Miller, received the sample, and a lab report confirmed his suspicions. The rock contained silver. Lots of it. The race was on!

It was already October, and a Canadian winter would soon set in, making travel impossible. Professor Miller rushed to the site along with two assistants. One of them was Cyril Knight.

Posted by Joanne Stanbridge at 7:57 AM 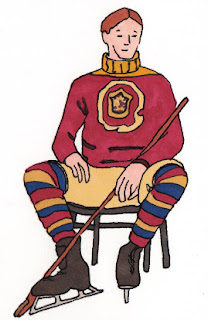 Soon after Freddie went to live at the asylum, and while his sister Muriel was living in the U.S. with the first of her many husbands, Cyril Knight was still living at home with his two younger sisters and their parents. The whole family was busy with music lessons, sports and studying, and their father's schedule was crammed with teaching, writing, committee-work, travel and science experiments.

"I have oiled the thing on the roof," Cyril wrote to him, "but you didn't tell me how to make out the report."

Cyril was a third-year geology student. He was also the captain of the Queen's University hockey team, which had recently won the American intercollegiate championship. But in August 1903, just as the team was looking ahead to an exciting new season, something extraordinary happened to Cyril.

Posted by Joanne Stanbridge at 5:46 AM

Alphadello: N is for Nest 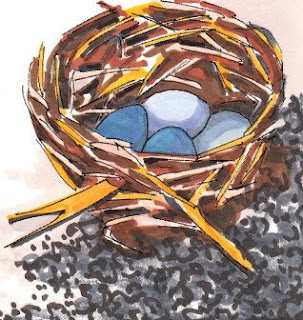 A bird's nest is the most graphic mirror of a bird's mind. It is the most palpable example of those reasoning, thinking qualities with which these creatures are unquestionably very highly endowed.

Birds' Nests: An Introduction to the Science of Caliology, by Charles Dixon (1902). Click here to read the book online, or download it free, from the Internet Archive.

Posted by Joanne Stanbridge at 9:35 PM 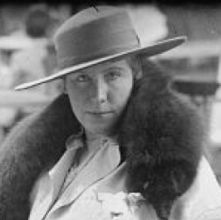 Fishing may-or-may-not have been Muriel's favourite hobby, but she certainly excelled at catching husbands. She married once more, sometime after 1941, and was widowed again late in her own life.

On August 6, 1959, Muriel died in Queen's, New York. Her body was returned to Kingston, and she was buried in Cataraqui Cemetery near her parents and daughter.

Not long before her death, she had filled out a Social Security claim form in the U.S. As brash as ever, Muriel recorded her birth date as 1895. With a stroke of the pen, she declared herself to be fifteen years younger than she really was.

Posted yesterday on Storydello.
Coming up next on Storydello: the equally-amazing (but very different) adventures of Muriel's younger brother Cyril.  Please stay tuned.... 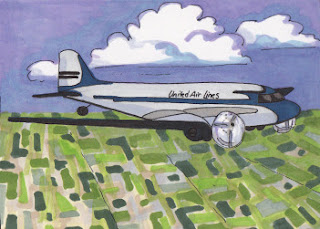 Within the space of three years, Muriel had lost both of her parents and her husband. But she never seemed to give up. In 1940, just two years after Lincoln's death, she married again. Her new husband was a famous clothing designer with outlets in New York, London and Paris.
It didn't last long. Soon the newspaper reported, "Nine months of married life with 80-year-old Amos Sulka was enough for Muriel Knight Stadler Sulka... She won a divorce at Reno, Nevada on grounds of cruelty late yesterday and was home for lunch today. She flew East on a United Airlines sleeper after a whirlwind trip to the city of broken romances."


She told the reporter she would travel to Canada in a few days to do some fishing..."my favourite hobby."

Posted by Joanne Stanbridge at 8:27 AM

Alphadello: M is for Magpie 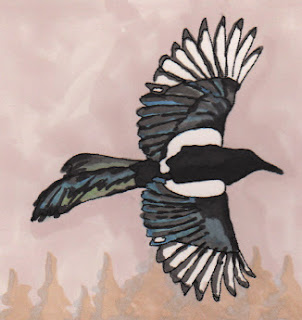 For the magpie, with exquisite skill,
Has invented a moss-covered cell,
Within which a whole family will
In the utmost security dwell.

Posted by Joanne Stanbridge at 5:15 PM