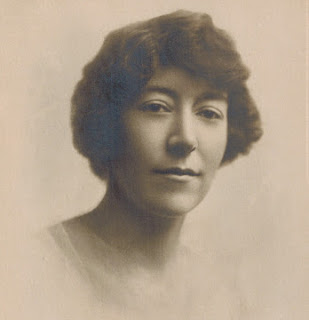 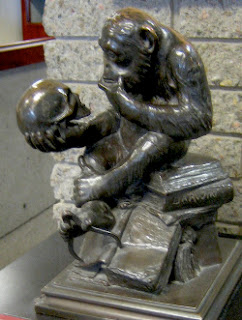 Phyllis Laura Knight
Phyllis Knight and Jean Royce continued to live in the small house at 140 Stuart Street until Jean's death in 1982. Phyllis moved to a nursing home and died there eighteen months later. She was 94 years old.

Today, a popular Queen's mascot stands in the medical library on campus. It's a small bronze ape in a pose similar to that of Rodin's The Thinker.

The ape's name is "Hugo," and he originally belonged to Archie Knight. Phyllis gave him to the library around the time the Knight family home was demolished. The theme of the statue is Darwin's Origin of Species. Archie recalled reading that book in his early days as a theology student at Queen's, and arguing passionately with his roommate:

"when that subject was broached there could be nothing expected but bad temper and red hot discussion. The conclusions...upset all our previous religious training and left us almost hopelessly stranded. I should never like to pass through those days a second time." [1]

Archie's roommate, Malcolm MacGillivray, went on to become a prominent clergyman in Kingston, and moderator of the General Assembly of the Presbyterian Church in Canada.

Archie gave up his theological studies and became a professor of professor of animal biology and physiology. He boldly argued in favour of Darwin's work, and wrote an essay that was "the first full-blown exposition of doctrinaire Darwinian evolution in the Queen's records." [2]

On the main floor of Bracken Library, just down the street from the spot where the Knight family home stood, Hugo is now bolted to his pedestal. (Library staff discovered that he had been spending too many nights out on the town with students.)  He still dresses up for various holidays, and his head is shiny from being "rubbed for luck." Thanks to Phyllis Knight, he stands both as a reminder of big ideas that shaped the university, and of the wit, intelligence and generosity that were her father's legacy.

Many thanks to Queen's University librarian Elizabeth MacDonald-Pratt for drawing my attention to the "Hugo" statue and generously sharing her research about him.

This is the last entry in the Storydello series 52 Queen's Crescent, about the Knight family in Kingston, Ontario. Thank you so much for following along!  Next up: Rogues and Royals, a 16-generation trip back through my Dad's line of descent. Please stay tuned!

Posted yesterday on Storydello.
Posted by Joanne Stanbridge at 6:43 PM 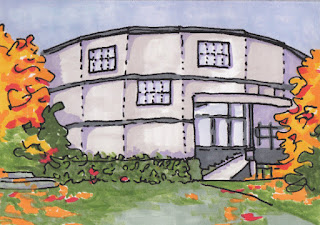 Stirling Hall now stands where Archie and Corrie raised their family. They watched Queen's University grow up around them, and played a vital role in the university community--they lived, studied and worked on campus.

Archie held positions in the biology department, the medical faculty, and the school of mining. He helped to design and equip the "New Medical Building" that opened in 1907. Ironically, it is now the home of Queen's University Archives.

When Phyllis's house was torn down, she saved and organized Archie's papers and donated them to the archives. His letters and notebooks are now preserved in the building he helped to design. These blog entries could not have been written without them.

Posted two days ago on Storydello.
Posted by Joanne Stanbridge at 8:52 AM