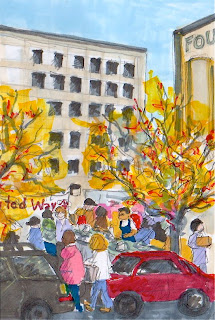 I'm catching up on some sketches I did a month or two ago--finally
putting the colour on them. This jumble sale was held in the parking
lot next to my apartment to raise money for the United Way. Somewhere
in the crowd, a guy was singing "Imagine" and playing an electric
keyboard. You can't see him in this drawing, but you could hear him
all the way down to City Park. Good acoustics!
Posted by Joanne Stanbridge at 8:01 AM 2 comments: 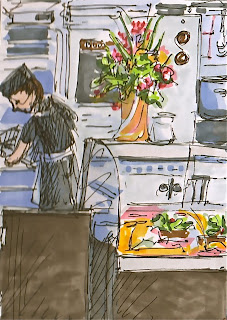 Yaayy, a new coffee-and-breakfast place! Just two blocks from here.
As soon as I stepped through the door, I did a silent cheer: it's
bright and new, with big windows and small tables, lots of variety on
the menu, and a deli with lovely take-home stuff. Louis Armstrong on
the sound system, oversized mugs with excellent hot coffee, fast
service and good food. Even the art on the walls is tasteful. Yaayy!
Posted by Joanne Stanbridge at 7:54 AM 2 comments:

Putting Up the Christmas Lights 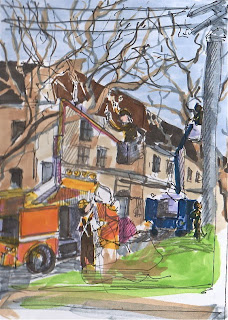 I counted twenty hydro trucks in City Park last weekend. For a second, I thought there had been a big power failure. Then I realized the workers were filling the trees with Christmas lights. This means the Jingle Bell Walk will soon take place. We'll walk through town to the park, where the mayor will throw the switch to turn them all on. (The lights, I mean. Not the workers. Ho ho ho.) Then we can all rush home, saying things like, "I can't believe it's nearly here," and "I'll never be ready in time," and "where did I leave my credit card?" Let the fun begin!
Posted by Joanne Stanbridge at 8:38 AM No comments: 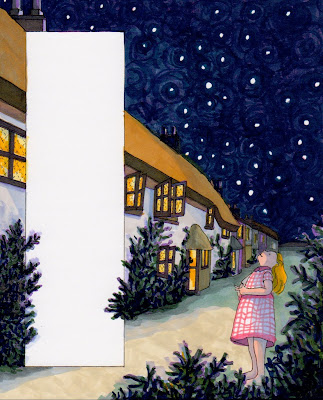 Twinkle twinkle little star, how I wonder what the heck I'm doing. Hahaha. I like the marker version above, but I like the watercolour below even better. That sparkly effect in the sky comes from sprinkling salt into wet paint. It makes me want to get right to work on "Star light, star bright, first star I've seen tonight"! 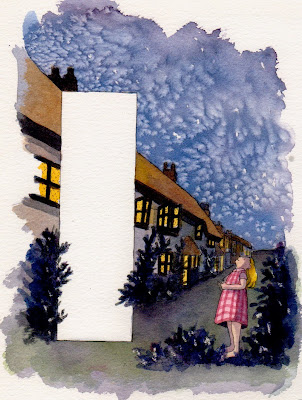 Posted by Joanne Stanbridge at 11:16 PM No comments: 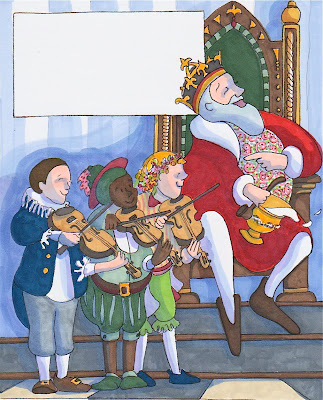 I'm still struggling with these nursery rhymes. The marker version (above) is the best of a bad lot, as you can see from the bloopers below.

It's sightly embarrassing to keep sharing all these failures with you. On the other hand, they're part of the process, and sort of fun to look at, in an "oh, my God" sort of way. Now you know why I feel so happy when a picture finally works out! 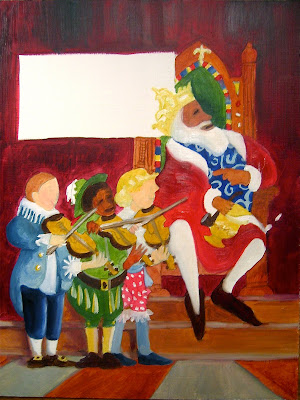 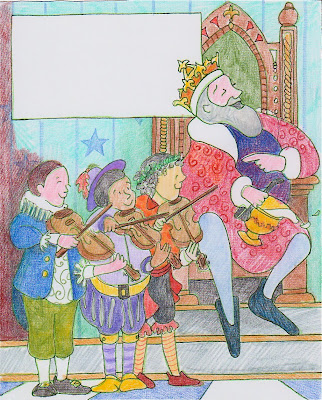 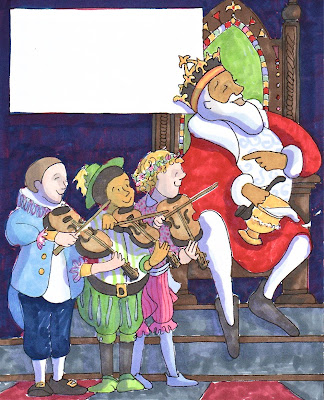 If these are too small, you can click to view them in giant technicolour. Shield your eyes first. 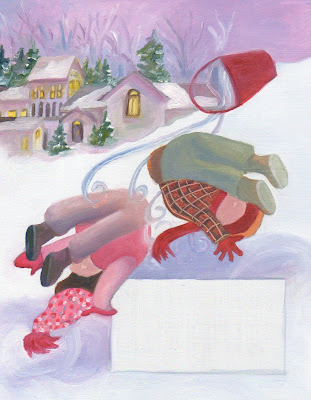 What medium should I use for these nursery rhymes? Here are three attempts, all unfinished, and I have a love-hate relationship with each of them.

Oils (above) blend smoothly and make delicious colours, but the painting part takes forever and then they have to dry for days and days. I find the process finicky and frustrating. On the other hand, there can be some rich and thrilling moments. I accidentally painted blue branches against the purple sky and ended up liking them. Also, I tried to add black lines on the plaid jacket, but instead the rubber-tipped "brush" left yellow tracks in the wet paint. That felt like another happy mistake. 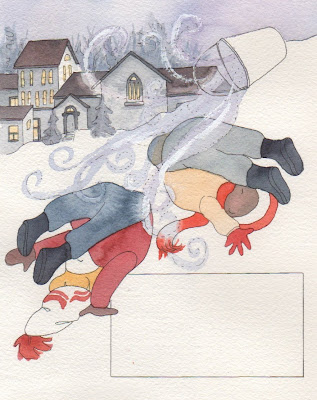 Watercolours (above) can do some nice swirly things, and I do like the watery bits on the blue trousers. But I abandoned this picture because it was feeling too flat and tame. Now I'm having second thoughts. Maybe I can go in and add some dramatic shadows or something. Sometimes when I'm in nothing-to-lose mode, I take a risk that ends up rescuing a dead painting. (But not very often.) 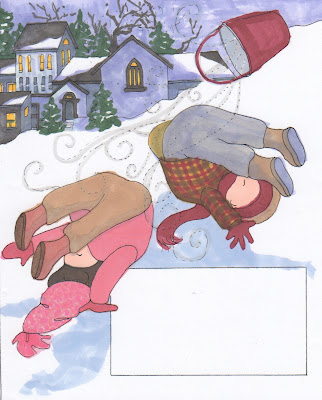 This one was only meant to be a quick sketch. I was trying to work out the colour scheme, and I had already botched a coloured-pencil version (see below--ouch!) So I ran a fresh photocopy and scribbled on it with Prismacolour markers. The whole thing was done in about ten minutes.

Ironically, I like the marker version at least as much as the oil version and the watercolour. And I absolutely love working with those markers. But they aren't meant to last for hundreds of years. They're not like oils or watercolours; over time, the colours will fade.

How much does this matter to me? I'm not sure. I'm still mulling all the pros and cons.

At least I know one thing. This coloured-pencil version has got to go! Yikes! 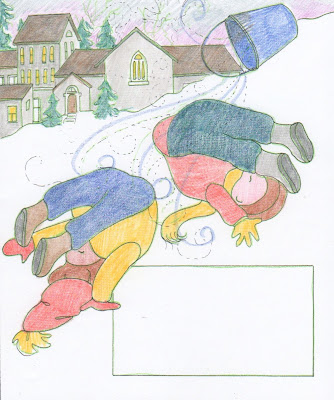 Lately I've been drawing scenes from nursery rhymes, and a few weeks ago I photocopied this one onto cardstock and coloured it with markers. It looked awful. I tried to rescue it by adding coloured pencil on top of the marker. That looked even worse. So I abandoned it and started again. Here's my second try: 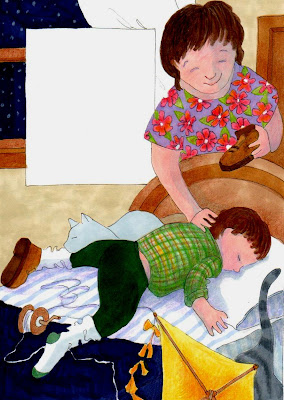 It wasn't as monstrous as my first attempt, but it seemed sort of pale and uptight, and it just wasn't making me happy. So in a fit of frustration, I pulled out the first version again, and painted all over it in oils. It came out like this: 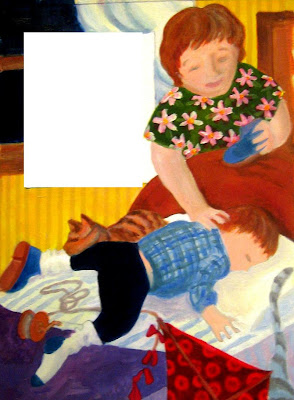 I do like the bright colours. But my brushwork is terrible, the edges are rough and blurry, and I have no idea how to handle the light and shade. I'm going to tackle it AGAIN one of these days, and of course I'll post the result for you to see. In the meantime, just let me say that oil painting is a lot harder than it looks! 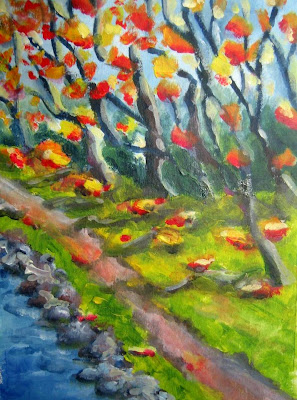 The learning curve continues! I'm looking forward to the weekend. I'll have more time to muck around with these new oil paints and to do some sketches with ink-and-markers as well. I'm loving the new medium and missing the old one, all at the same time. Too bad there aren't more hours in a day!
Posted by Joanne Stanbridge at 7:04 PM 1 comment: 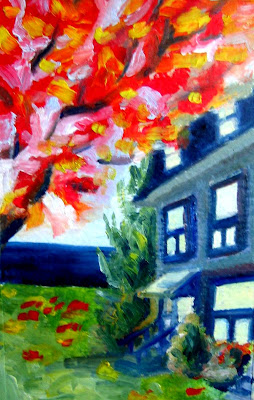 Now I have toilet paper in my living room (for cleaning brushes). And a dish-drying rack (for storing wet paintings.) Also, my fingers are sticky with this "fast drying medium" (for speeding up the drying process. Apparently.) But it won't come off with soap-and-water or rubbing alcohol or baby oil or hand cream. What the heck is this stuff? Is it brewed on another planet? Can it possibly be good for me or my sketches? As soon as I post this blog entry I will go look up some answers.

Meanwhile, I can't put these sketches on my scanner because they aren't dry yet. So I have to photograph them instead, which means I have to tweak the colours and brightness and contrast digitally afterward, and as you can see, I'm not very good at it. 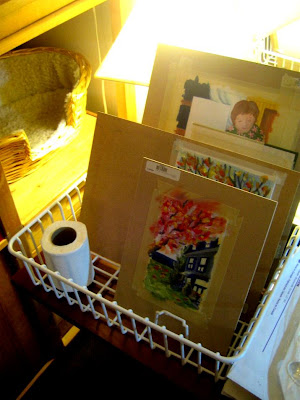 So I'm on a learning curve with this new oil-painting kick. It's frustrating, but absorbing, and very exciting. I'm having a blast! I'll post more soon. Please brace yourselves. Meanwhile, I hope you are all well and happy.
Posted by Joanne Stanbridge at 10:24 PM No comments: 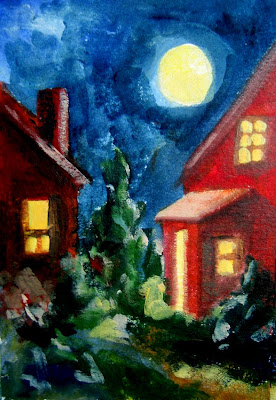 I seem to be in "experiment mode" these days. Is this a settling-in-to-winter thing? When I saw a beginner's set of water-soluble oils at the art store today, I just couldn't resist. My grandmother used to paint in oils, and I love the way they look, but the process always seemed too complicated to me--all those thinners and varnishes and extenders and things.

Nowadays, they make water-soluble oil paints. They feel, look and even smell exactly the same as regular oils, but you use water instead of turpentine to thin them and clean them up. After the paint dries, it's just as permanent and waterproof as regular oils. Or so "they" say. 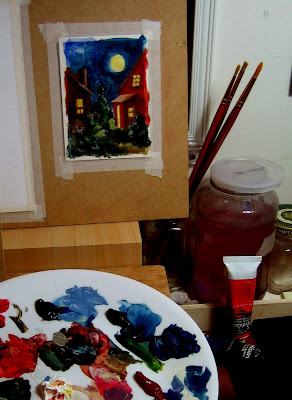 I have no idea what I'm doing, but I do know one thing--it's FUN. I love the way you can paint over your mistakes. You can't do that with watercolours!
Posted by Joanne Stanbridge at 7:46 PM 4 comments: