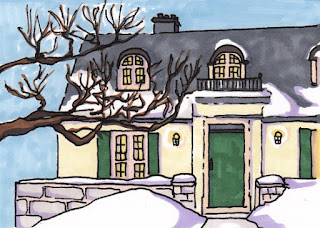 In 1961, when Phyllis said "no" to the property developer, the university principal stepped in. He negotiated the deal himself. He invited Phyllis for tea, and they discussed the matter quietly. Faced with the inevitable, Phyllis relented. Her home would be torn down.

Jean and Phyllis moved to a smaller house just two blocks away, at 140 Stuart Street. As in the old house, each had her own apartment, where they lived quite happily for fifteen more years.

Posted by Joanne Stanbridge at 9:00 AM 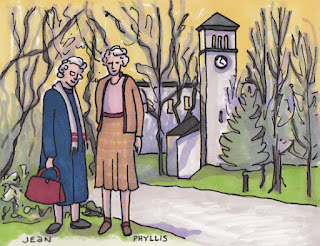 The house was two-and-a-half storeys tall, made of brick with wood floors, big closets, a dining room with a built-in china cabinet, and a fireplace. It was from this house that Phyllis's siblings started their marriages and careers, and moved away. This was also the house where her niece (Muriel's daughter) came in 1903 as a toddler, grew up and married, and emigrated to England. And it was in this house that both of Phyllis's parents had grown old and died in 1935 and 1936.

Phyllis continued to live in the house for many years afterward, making her living as a music teacher, giving lessons and even holding recitals in the living room. To boost her income, she converted the second floor into apartments, and rented one of these to the famous university registrar, Jean Isobel Royce. The two women became fast friends.

Posted by Joanne Stanbridge at 8:52 AM 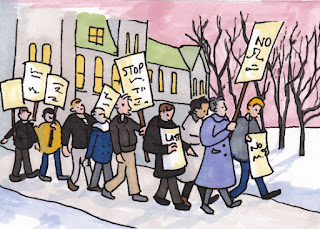 A controversy erupted at Queen's University in 1961, twenty-six years after the death of Archibald Patterson Knight.

As a scientist, Professor Emeritus, and former member of the university's Board of Trustees, AP might have been in favour of the plan for a new physics building on the Queen's University campus. But the Board had chosen a site that would destroy the last large green space on campus. Students and faculty protested, demonstrations were held, and the Board was forced to change its decision.

An alternative site was chosen on Queen's Crescent, where most of the property owners had agreed to sell. Just one person held out. It was Archie and Cordelia's daughter, Phyllis Knight, who had lived at 52 Queen's Crescent for nearly 70 years.

Posted 3 days ago on Storydello.
Posted by Joanne Stanbridge at 12:51 PM