In the Music Library 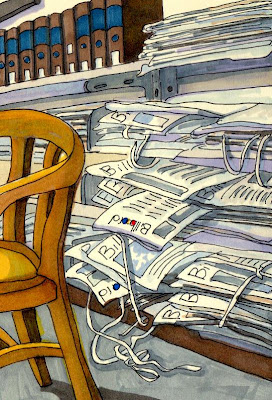 This morning I spent a couple of hours in the university's music library, reading about composers for a project I'm working on. When I turned to leave, this bookshelf caught my eye. I must have been thinking too hard about what I'd been reading, because these books suddenly looked like music to me. There seemed to be a rhythm and repetition to them, and those curls and swoops of string reminded me of a melody. But I can't write music, so I drew them instead! 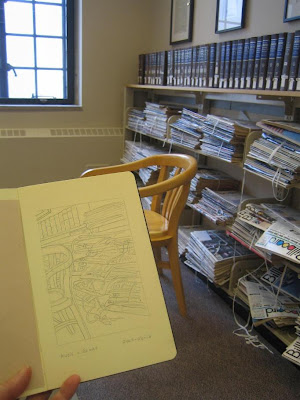 In a week or so, this room will be packed with students, but this morning it was empty and completely quiet--a wonderful place to work.
Posted by Joanne Stanbridge at 9:36 PM No comments:

Lion in the Park 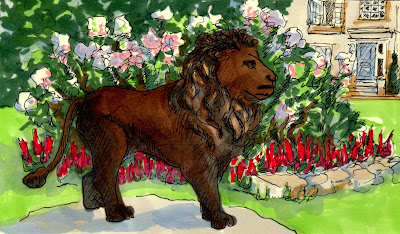 Today I noticed that the flowers in the garden were taller than the lion's head. When winter comes, it'll be hard to remember (or believe) that, so I decided to stop and sketch him. 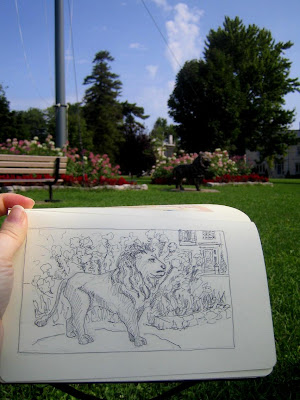 While I was drawing, two young men came along. They stepped right between me and the lion, studied it for a while, talked about how they wouldn't like to meet it in real life, then climbed on it for a little photo-shoot. My sketchbook didn't faze them a bit. They behaved as if I wasn't there.

As they were leaving, one of them turned to me with the sweetest grin. Surprise! I wasn't invisible after all. He said, "My mother used to sit on that lion forty years ago."

He didn't say whether anyone was trying to sketch it at the time.
Posted by Joanne Stanbridge at 10:27 PM No comments:

Giraffe in a Truck 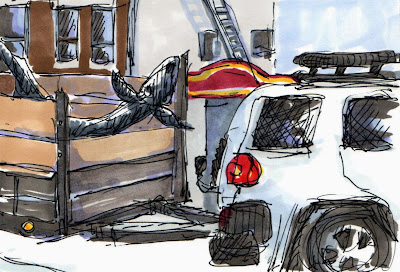 All week, a metal-worker has been "building" this giraffe near the tourist office. I kept meaning to investigate--and sketch--it. But tonight I came across it in an unexpected place. 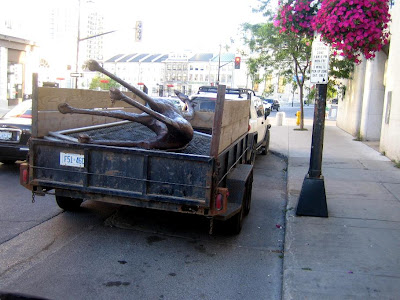 It was parked in front of a shop that sells arts and crafts from around the world. When the store is open, big metal emus guard the door. I wonder if the giraffe will soon be joining them.

While I was sketching, three different passers-by stopped to take pictures of it, and a couple of others slowed down to look and comment. It did look funny--as if it had suddenly decided to lie down and take a nap! 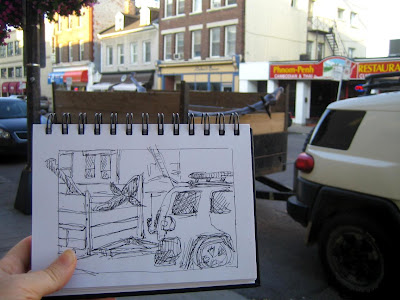 Posted by Joanne Stanbridge at 8:55 PM No comments: 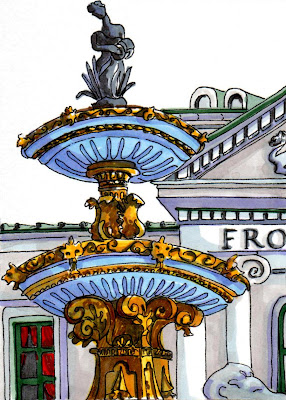 By 8:00 a.m. today, I was already wilting from the heat. The cicadas were singing like mad and the humidity was so high that everything looked hazy. On my way home with some groceries, I sat under a tree to sketch this splashing fountain. 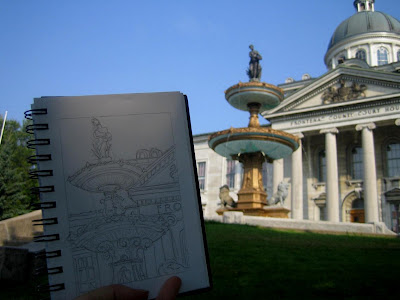 I've always been crazy about this fountain. That pale turquoise colour seems tender and thrilling to me. And who could resist those lion gargoyles? My favourite is the bucktoothed-vampire one in the middle photo below. As if his teeth aren't irresistible enough, he has dragon wings as well! 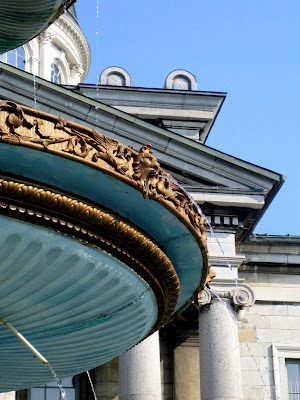 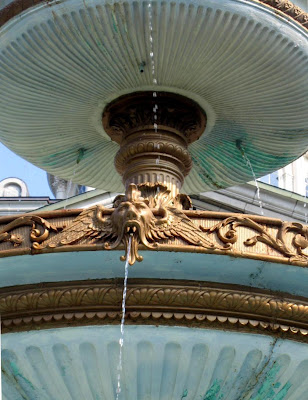 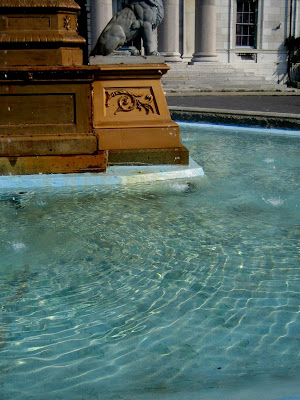 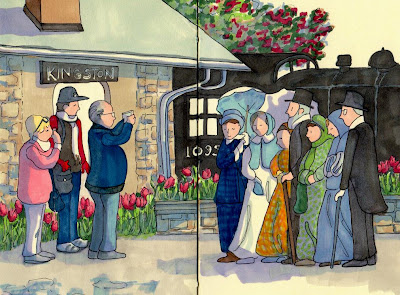 Tourists are everywhere right now! We're at the height of the season. I drew this picture a few months ago (as you can see by the tulips) and I finally got around to putting the colour on it this week. 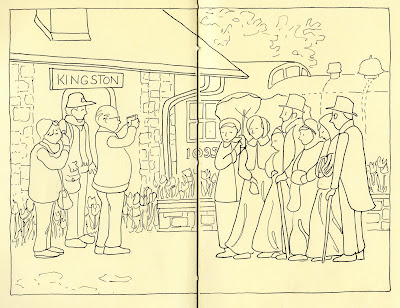 It takes up two pages of my sketchbook. That's why there's a line running down the middle!

Posted by Joanne Stanbridge at 5:59 PM No comments: 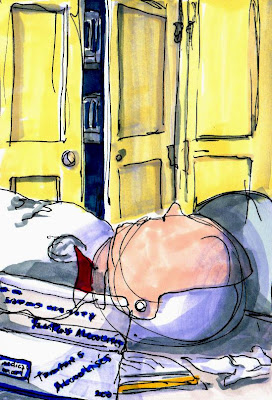 I just finished taking a two-day First Aid course as a re-certification requirement at work. During a short break I scribbled this sketch. It may not set the art world on fire, but it felt like a milestone because I did it in front of my colleagues and fellow students. 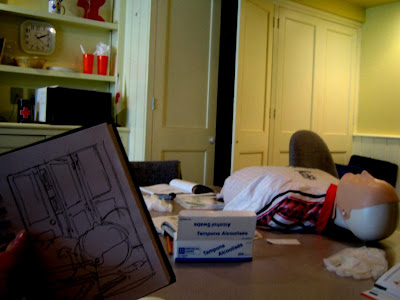 Several people were standing behind me at the time. It was hard to tell what they were really thinking. Maybe I don't actually want to know! But I'm learning that I can get past the awkwardness as long as I'm really keen to share the subject matter with you. So...thanks! 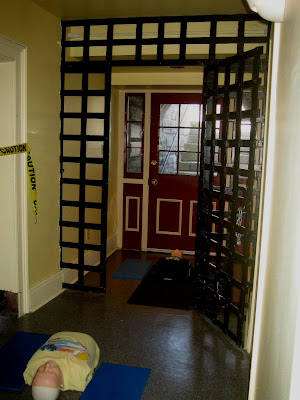 The course took place in the old gaoler's residence behind the county courthouse. Prisoners used to be kept down here. Check out the iron gate! Can you imagine what a clang that made when it slammed shut behind a murderer? Nowadays, people go there to learn how to save lives. You can see two CPR dummies on the floor, waiting to be "resuscitated" for the umpteenth time.

Posted by Joanne Stanbridge at 9:30 PM No comments: 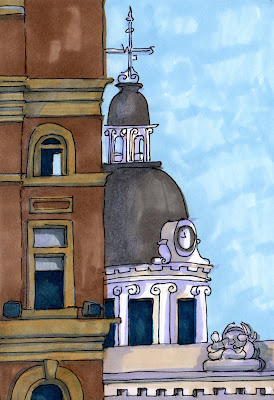 This is my 100th Everdello post. Thank you SO MUCH to those of you who have been following along and sending me good wishes. I can't tell you how much joy your kind words have given me. You are the greatest!

To celebrate, I drew the weather vane on top of City Hall. I knew you'd appreciate the fact that I actually made it fit on the page.

In my earlier sketch, the clock showed 4:50 p.m.--time to head back to work for the evening shift. This time, it says 8:50 a.m. I'm so grateful to live in a place where I can squeeze some sketching-and-breakfast into that little gap before the workday begins.

More soon! And many thanks to you. 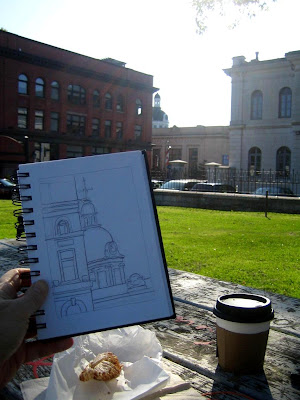 I heard someone say that the circus was in town, so I wandered over there after dinner. I thought I might be able to sketch some elephants. Oops! I'd forgotten Rule Number One of Sketching: "you never get what you expect." Instead of elephants, I found an animal rights protest. 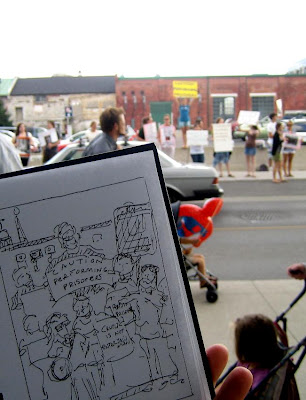 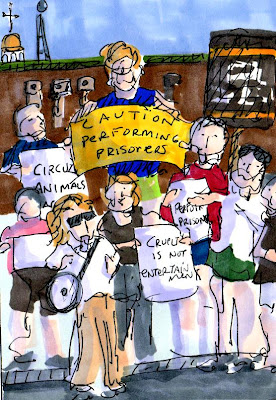 The woman with the loudspeaker said the animals (including the elephants) are kept in this 18-wheeler, without room to lie down, at all times except when they are performing. 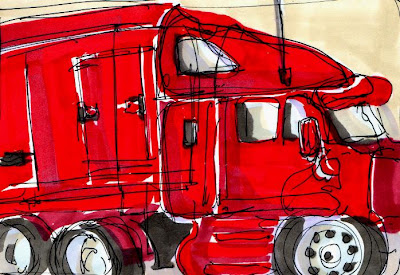 Parents and children were everywhere. I didn't see any ticket-holders turn away, but I did overhear some wonderful conversations between parents and children about what a protest is. Ethics and elephants aside, the whole thing made for a rich and interesting sketching experience. 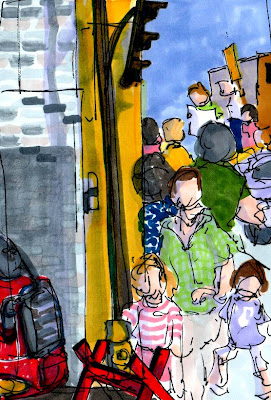 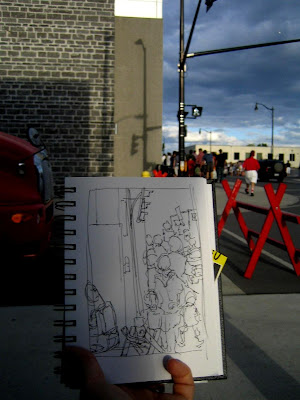 Posted by Joanne Stanbridge at 10:36 PM No comments: