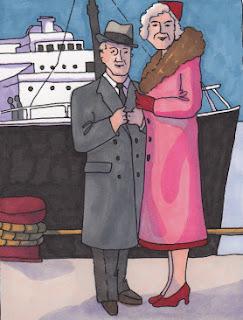 Muriel and her husband joined the rich and famous in places like Bermuda, France, Lake George and Palm Beach.

In 1925 they visited Kingston to attend her daughter's wedding, but they were soon off again. Six months before the stock market crash of 1929, they were in Florida at the Whoopee Ball, "the Big Event of the Week," kicked off by a dinner hosted by Mrs. William Randolph Hearst.

Unlike many, Muriel and Lincoln seem to have weathered the Great Depression reasonably well, and in September 1936 they celebrated their 25th wedding anniversary.

But two years later, on the beach at the Forest Hills Surf Club at Atlantic Beach, Muriel's husband had a heart attack. He died before medical help could reach him.

Posted today on Storydello.
Posted by Joanne Stanbridge at 3:14 PM 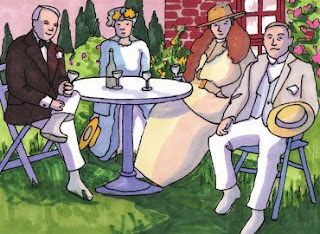 Muriel's new husband was A. Lincoln Stadler. He was the president of the Merchant Tailors Association in New York--the man who announced the new fashion trends in the newspaper each year. He and Muriel lived a life of glamour and travel.

In 1915, just three years after her first hotel had failed, Muriel opened another: the Monmouth Beach Inn on the Jersey Shore. That summer, there were parties around the pool, dances, water sports and contests.

"Prizes and trophies were presented by Mrs. Muriel Spencer Stadler to the winners."

Posted by Joanne Stanbridge at 9:06 AM

Storydello: Muriel and the Hollywood Hotel 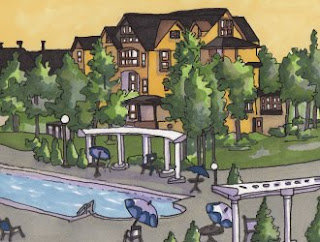 In 1906 there were thirteen divorces in Canada. Muriel's was one of them. But it would take more than a little social stigma to hold back this determined young woman.

After her divorce, she bought a resort in New Jersey called the Hollywood Hotel. There were already two mortgages on the property. Muriel took out six more and re-married (a rich husband, this time!)  She borrowed money from him to keep the hotel going.

It didn't work. Within a year, she was declaring bankruptcy. But even that didn't slow her down for long. Muriel was irrepressible.

Posted today on Storydello.
Posted by Joanne Stanbridge at 5:20 PM 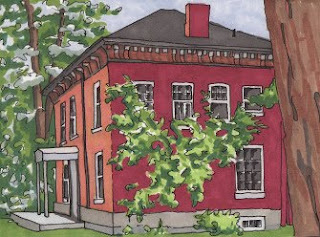 It certainly looked respectable. In 1900, around the time her brother Freddie was admitted to the asylum and her younger siblings were still living at home with their parents, Muriel married the son of a prominent Kingston clergyman.

Six years later, they were divorced. "I only wish to God he was dead," Muriel wrote to her mother, "with his lying drinking ways...Love to all, and just longing to see you tomorrow."

Muriel would stop at home long enough to drop off her 2-year old daughter. Her parents would raise the child themselves.

Meanwhile, Muriel had her sights set on New York City. "If you would just lend me that little fur," she begged her mother, "and lend me grandma's muff, till I come back. I hate to go down without any furs."

Posted by Joanne Stanbridge at 6:20 PM

Alphadello: L is for Loon 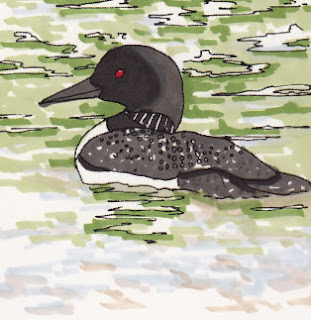 Why, the Loon is the most astonishing and remarkable and astounding and wonderful and amazing diver you ever heard of!

Swimming Birds, by Norman Allison Calkins and Abby Morton Diaz (1878). Click here to read the book online, or download it free, from the Internet Archive.

Posted today on Alphadello.
Posted by Joanne Stanbridge at 6:49 PM 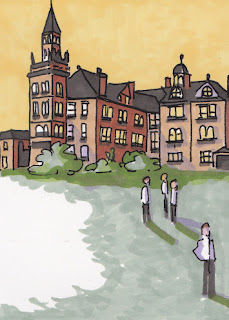 After the Huronia Regional Centre closed in 2009, lawsuits were brought against it for decades of neglect and abuse of residents. Eventually, the provincial government issued a formal apology and paid a $35 million dollar settlement.

For Freddie, this was too little, too late. He died in 1967, when the abuses at the Centre were known but not yet widely publicized. Freddie lived to be 91 years old, and spent more than 65 years in the institution. He is buried at Cataraqui Cemetery in Kingston, near his parents Archie and Corrie Knight.

Coming up next on Storydello: the adventures of Freddie's irrepressible sister Muriel. Please stay tuned!

----
Posted today on Storydello.
Posted by Joanne Stanbridge at 6:35 PM 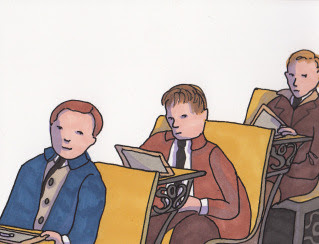 By the time Freddie arrived at the Orillia Asylum, it was already overcrowded and underfunded. Worse, it had begun to shift its focus from education and training to "custodial care"--which meant patients were mainly segregated from the general population, institutionalized for life. Over the years, it changed its name to the Ontario Hospital School, and still later to the Huronia Regional Centre.

During Freddie's time there, the number of residents increased from about 650 to more than 2,500. Run by the provincial government, but low on its list of priorities and unpopular with tax-payers, the hospital was chronically understaffed, neglected, and under-supervised. The results were tragically predictable. And Freddie lived there for more than six decades.

Posted yesterday on Storydello.
Posted by Joanne Stanbridge at 6:32 PM 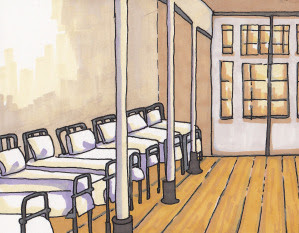 After Freddie was admitted to the asylum, he disappeared from almost all the family records. It wasn't that they'd forgotten him. His father's will provided "annually to the Ontario Hospital at Orillia the sum of Seventy Eight dollars for the maintenance of my son Frederick A. Knight." But Freddie's name wasn't even mentioned in the obituaries of his parents or grandmother. As shocking as this seems in our time, in those days it was common for families to hide the fact that a child had been institutionalized.

Ironically, Freddie's great-uncle Joseph Workman had been the superintendent of the Toronto asylum, and was world-famous for his humane treatment of patients, providing good food, minimal medication, lots of alcoholic drinks (!) and staff who practiced "unvarying kindness, never-tiring forbearance, and undeviating truthfulness."

Later, the Orillia Asylum became known for exactly the opposite treatment of patients, and much worse. But that's where Freddie was sent.

Posted by Joanne Stanbridge at 5:20 PM

Storydello: Freddie at the Orillia Asylum 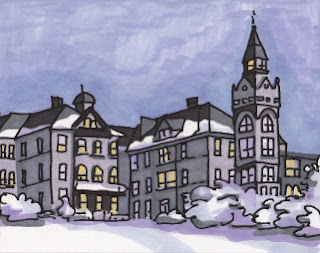 Freddie was born with some sort of intellectual or developmental disability. We don't yet have access to the records that will give more details about his condition, but he seems to have lived at home with his parents and siblings until about 1899. Then his father sent a letter of application to admit him to the Orillia Asylum, and soon afterward, Fred went to live at that institution.

Thirty-four years later, he was still there.

Posted 2 days ago on Storydello.

Posted by Joanne Stanbridge at 5:17 PM 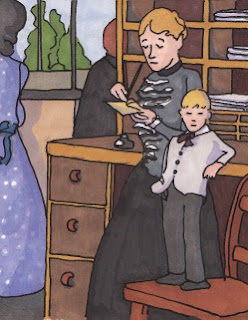 Corrie and Archie's son Freddie was about five years old when his grandmother dropped in to a Kingston department store and wrote this postcard to his mother. She was babysitting the children while Corrie and Archie were away.

"Dear Corrie -- the children are quite well and happy. Freddie and I have just finished our marketing and are now on our way home. I am writing this at Stacy's. I hope you will enjoy your trip..."

Posted 3 days ago on Storydello.
Posted by Joanne Stanbridge at 5:15 PM

Alphadello: K is for Killdeer 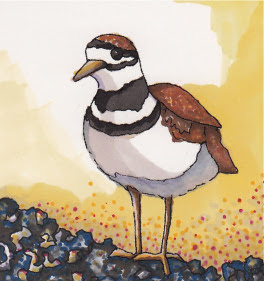 A killdeer plays "hurt bird" to lure an enemy away from its nest. It limps along, dragging its wings and screaming loudly.

From The First Book of Birds, by Margaret Williamson (1951). Click here to read the book online, or download it free, from the Internet Archive.

Posted two days ago on Alphadello.

Posted by Joanne Stanbridge at 8:29 AM